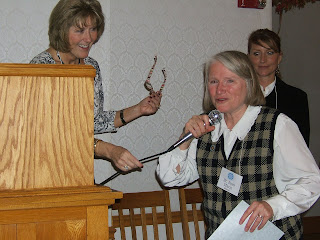 When she accepted the grant, Sister Jean Marie Ballard, Simply Divine supervisor, announced that sisters were at that moment working in the bakery. She then left to tell them the good news. Carolyn Fuhs is at left and Darla Blazey is in the back.
Women of the Rule presented its first grants during a festive awards banquet on Saturday evening, November 6. During the dinner, members voted to select these projects for funding: a new roof and gutters for the sisters' monastery in Morropon, Peru ($4,500), a freezer for Simply Divine, the monastery bakery ($6,657), a year's tuition for three sisters working toward education degrees ($13,000), and development of a long-range facility and property master plan ($11,470.52).

Less than two minutes after the four grant recipients were named, Nancy Habig, who served as emcee for the dinner, announced that an anonymous donor, in the spirit of the evening, offered to provide $1,625 for a fifth proposal that was a grant finalist: scholarships for cancer patients and their caregivers to attend centering prayer programs.
(You'll find more details on the projects on our web site under "Recent News.")
The women's philanthropy circle was publicly launched in June 2009 and, since then, has grown from a core group of 11 lay women and three sisters to 60 members! The core group began meeting in 2008. The idea for Women of the Rule originated with Sister Barbara Catherine Schmitz and Darla Blazey, who that year took part in Connect with Southern Indiana, a program sponsored by the University of Southern Indiana. Program participants collaborated in developing project concepts to benefit the community.
Sister Barbara Catherine and Darla envisioned a women's philanthropy and giving circle that supports the mission of the Sisters of St. Benedict. Members pool their donations and then decide where their funds should go -- a terrific concept that gives women the opportunity to experience the power of giving as they make philanthropic decisions with others committed to the same values.
These are the core group members (listed alphabetically): Teri Hollander Albin, Lynn Belli, Darla Blazey, Paulette Campana, Sue Ellspermann, Carolyn Fuhs, Nancy Habig, Judy Huber, Sister Kathryn Huber, Kathy Kleindorfer (facilitator), Pat Koch, Sister Barbara Catherine Schmitz, Sister Barbara Lynn Schmitz, and Mary Jo Tempel. Congratulations and thanks to you all for establishing a unique and important group!
Posted by Karen Katafiasz at 2:24 PM
Email ThisBlogThis!Share to TwitterShare to FacebookShare to Pinterest